Handcrafted tips to help you succeed through every year in college.
Return to College Graduate Timeline. 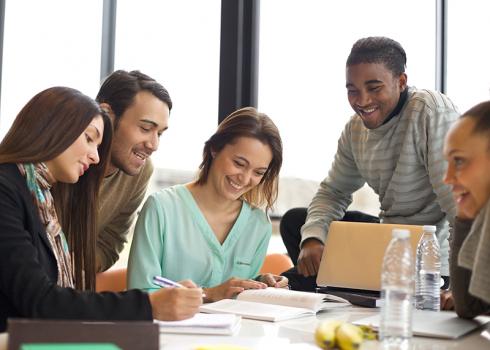 Sarah Rumon has a lot of reasons she loves being in the Gamma Iota Sigma (GIS) international business fraternity, like connections to fellow students and alumni around the country.

“I can still think back to my first international conference where I met a few people from St. John’s University, and I still talk to them two years later. I never would have met them if it were not for GIS,” says Rumon, a senior at the University of St. Thomas — Minnesota. “So I really enjoy that feeling of community and camaraderie.”

But let’s be real — the fact that Rumon got a job offer before she even started her senior year in college has to be her favorite part about joining the organization.

“It is a huge relief, and another selling point for the insurance industry,” said Rumon, a future employee of Travelers Insurance. “They want to hire people, and more people should consider it; they really should.”

The idea of a “business fraternity” may sound like an oxymoron to many students entering college, who are probably only familiar with stereotypes of rowdy parties and keg stands. Sadly, or not, joining a fraternity to get a great job doesn’t make for hilarious movie material.

It does, however, make for a very smart decision. Business fraternities have been around in the United States for more than a century, they are often co-ed, and they give students a major leg up on entering the real world through professional experiences and a network of like-minded peers.

What makes Gamma Iota Sigma — or simply Gamma, as most members refer to it — one of the best business fraternities in the country is that it’s specifically tailored to students interested in pursuing careers in insurance, risk management and actuarial science. (The letters actually stand for Collegiate Insurance Society, as gamma is the equivalent of the letter C in the English alphabet.)

Founded 50 years ago, GIS has 70 chapters in North America, with an annual membership of more than 4,000 students and more than 22,000 alumni. It offers its members a number of career resources, with regular advice, on-campus speakers and access to alumni organizations. There’s also an annual conference that brings together GIS members from all over the world to network and learn more from each other.

While 80 percent of GIS members graduate with risk management and insurance (RMI) or actuarial science majors, the remaining 20 percent study a variety of other areas. Indeed, most students who join GIS were not RMI majors at some point.

“Most of our students don’t come in as insurance majors,” said Noelle Codispoti, executive director of GIS.

But, as soon as many of those students start to hear about opportunities in the RMI industry, they get hooked.

“When I was a student, the underwriter who insured the show ‘Survivor’ came in and talked to us, and 400 students wanted to be entertainment underwriters when they walked out of that room,” Codispoti said. “I’m sure few of them actually became entertainment insurers, but they all probably work in the insurance industry in some capacity.”

Veena Kanumalla had a similar experience. In high school, she had a lot of people pushing her to take the pre-med track in college, but as soon as she took a risk management class, she was hooked. Her next step was to immediately join GIS, and now she is vice president of risk management and insurance career development for her chapter at Temple University, a role in which she brings in speakers to talk about the diverse career paths that are open to students.

“What draws a lot of students to GIS is that there are a lot of niches in the insurance industry, and our fraternity allows you to explore and find what you’re interested in,” she said. “For me, specifically, I was always interested in pre-med and science, and I’m in employee benefits, so in my internship I work with health insurance every day, dealing with risk management for different health conditions.”

In addition to finding a fit for her existing interests, Kanumalla said GIS has also helped her expand her horizons and go outside her comfort zone, such as when she spoke before 500 people at a GIS annual conference.

“It was incredible for someone who had been just so shy to be able to get up there and do that, and I could only do it with the encouragement from everyone in the fraternity,” she said.

That professional experience is something many GIS members said was ultimately most valuable, because they felt the organization provided so many more opportunities than their college alone could provide. Officers in each chapter are responsible for organizing events, communicating with their membership, and otherwise operating like true business leaders, and the GIS organization expects them to act as such.

“Even though this is a student organization, I’ve never felt that I was being treated as a student,” said Omar Powell, president of the GIS chapter at Howard University. “Ever since I’ve been a part of Gamma, I’ve always had a consistent feeling that I’m a developing professional.”

In his role, Powell is responsible for organizing events, recruiting new members, and running various programs to help members grow as both professionals and people. He said that’s been crucial in helping him develop his skills as a leader.

“There’s always a great interest in wanting to develop those student leaders,” he said.

When those skills are applied to a field like RMI, which is in need of hiring more young people to its ranks, the result is one of the highest rates of majors finding jobs immediately after graduating. You also find students like Rumon who have jobs before they even start their senior year, and others who are fielding many different offers at once.

“Some of our more widely recognized schools have as many as four to five job offers for every qualified student seeking an entry-level position,” Codispoti said.

To learn more about GIS and get involved today, go to GammaIotaSigma.org.